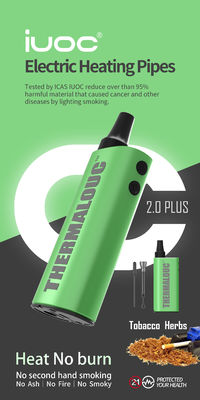 Heat-not-burn products, also known as heated tobacco products, only heat tobacco. The heating process generates a flavorful nicotine-containing vapor. And since the tobacco does not burn, the levels of harmful chemicals are significantly reduced compared to cigarette smoke.

What is a heat-not-burn tobacco product?

What are some examples of HNB tobacco products?

There are a number of these tobacco products available on several markets. Examples include iQOS from Philip Morris International, Ploom TECH from Japan Tobacco International, Glo from British American Tobacco, and PAX from PAX Labs.

How do HNB tobacco products work?

In order to produce the nicotine-infused vapor, HNB tobacco products heat tobacco up to 350°C (lower than 600°C as in conventional cigarettes) using battery-powered heating-systems. The heating-system enclosed in a device, can be an external heat source to aerosolize nicotine from specially designed cigarettes (ex. iQOS and Glo), or a heated sealed chamber to aerosolize nicotine directly from tobacco leaf (ex. Ploom and Pax).

The heating device requires charging and the user draws on the mouthpiece at intervals to inhale volumes of the aerosol through the mouth, which is then taken into the body.

Where are HNB tobacco products marketed?

Currently, there is no evidence to demonstrate that HNB tobacco products are less harmful than conventional tobacco products. Some tobacco industry-funded studies have claimed that there are significant reductions in the formation of and exposure to harmful and potentially harmful constituents relative to standard cigarettes. However, there is currently no evidence to suggest that reduced exposure to these chemicals translates to reduced risk in humans. Therefore, additional independent studies will be required to substantiate claims of reduced risk/harm.

What does WHO recommend?

All forms of tobacco use are harmful, including HNB tobacco products. Tobacco is inherently toxic and contains carcinogens even in its natural form. Therefore, HNB tobacco products should be subject to policy and regulatory measures applied to all other tobacco products, in line with the WHO Framework Convention on Tobacco Control (WHO FCTC).

What do we not know?

There is a large knowledge gap, as this generation of HNB tobacco products has not been on the market long enough for potential effects to be studied. Conclusions cannot yet be drawn about their ability to assist with quitting smoking (cessation), their potential to attract new youth tobacco users (gateway effect), or the interaction in dual use with other conventional tobacco products and e-cigarettes. Future independent studies should address these effects, as well as the safety and risk of HNB tobacco products.